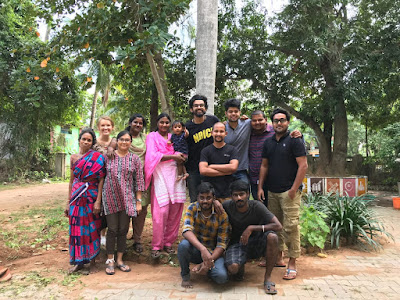 With India having the largest ever youth population, we have a chance more than ever to contribute in the socio-economic development of the country. India has for centuries seen the rise of young people like Bhagat Singh and so many others who have come forward for the freedom of this nation.

Now after 73 years of independence, with the highest youth population in the world, we have young people coming up in the process of nation building. They are the agents of change in the society. Often we fail to recognize the choices that the youth of the country make to be active agents of change. Sometimes this comes at a great cost for them which go unnoticed.

On the National Youth Day this year, it becomes essential to acknowledge the role of youth in the socio-economic development of the country. Not only they are young minds with a passion to drive change in the society, they also infuse their enthusiasm to uphold greater causes. More and more the youth of our country have begun to make conscious decisions to be vocal in the socio-economic and political field and to become an example that the next generation will look forward to. In Tamil Nadu, with Sandhiya Rani to become the youngest village Panchayat President in 2020 in Krishnagiri district , the role of youth in rural development does not need a detailed description. Also not locally but globally with several movements being led by the youth, for example, Greta Thunberg, Malala Yousafzai, we again witness rise of youth in issues core to developmental processes.

"Out of the paths of the morning star they came
Into the little room of mortal life.
I saw them cross the twilight of an age,
The sun-eyed children of a marvellous dawn,
The great creators with wide brows of calm,
The massive barrier-breakers of the world
And wrestlers with destiny in her lists of will,
The labourers in the quarries of the gods,
The messengers of the Incommunicable,
The architects of immortality.
Into the fallen human sphere they came,
Faces that wore the Immortal's glory still,
Voices that communed still with the thoughts of God,
Bodies made beautiful by the spirit's light,
Carrying the magic word, the mystic fire,
Carrying the Dionysian cup of joy,
Approaching eyes of a diviner man,
Lips chanting an unknown anthem of the soul,
Feet echoing in the corridors of Time.
High priests of wisdom, sweetness, might and bliss,
Discoverers of beauty's sunlit ways
And swimmers of Love's laughing fiery floods
And dancers within rapture's golden doors,
Their tread one day shall change the suffering earth
And justify the light on Nature's face."
With this, on the birth anniversary of Swami Vivekananda, our organization wishes every youth, committed to be changemakers, a very happy National Youth Day. 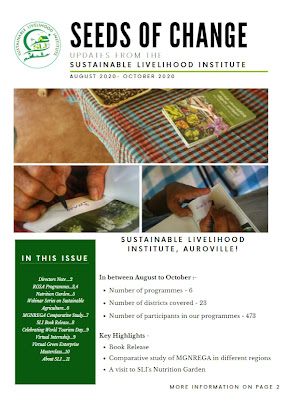 Understanding the Stress in Rural Livelihood during the time of the Pandemic through a comparative study of the MGNREGA days of job created in different regions, districts across Tamil Nadu

The Mahatma Gandhi Rural Employment Guarantee Scheme (MGNREGA) or more popularly known as the 100-day employment guarantee scheme has been a panacea in the difficult times of the post-Pandemic rural landscape. A scheme that was initially started as a minimal earning possibility for the semi-skilled and unskilled rural labour during times of draught and famine, this scheme has come to be a significant social security net during difficult times. In the immediate aftermath of the lockdown due to the pandemic, when industries were shut and the migrant workers from industrial centres and urban areas were left with no option but to go back to their villages, the MGNREGA gave them a minimum livelihood option in their respective work places.

Tamil Nadu as a State has several ways of looking at the various regions based on the livelihood options available there. The Northern belt that is influenced by the Chennai and its surrounding industrial belt, the central belt of predominantly agricultural activity driven districts, the delta districts in the east that are again driven by the agricultural economy, the west with its vast industrial zone and the south with a mix of abundance of natural resources and dry land farming. Each of these regions pans several districts.

Something interesting was observed during the early days after the lockdown and even more so after the lockdown was partially lifted in the northern districts of Tamil Nadu – a region where unless there is an excessive drought or industrial layoff, the uptake in MGNREGA is rather low. In the moth after the lockdown the region saw several more jobs being sought by the labour force in this region, however on the easing of the lockdown, the pressure came down immediately and in comparison to the previous year, it actually was lesser! This indicates that much of the agricultural labour who may be conventionally employed in agricultural activity during the beginning of the season, have been observed in the industrial sector now. Similar trends have been observed in other regions of the State as well.

Ms. Varshini Kaliappan, an ex-Intern at SLI and a friend of the Institution has been helping to understand the data and draw inference from the same by tabulating the data. SLI will bring out a comprehensive understanding and analysis of the MGNREGA data in the State based on her study as a report soon with several insights. Meanwhile, here is a sneak preview on the same, just looking at the regional variations in job demand under the scheme during various months in a year over the past 5 years including till last month.

·         In the financial year of 2020-21, immediately after the nation-wide lockdown there’s a huge dip in employment provided across all the districts in 4 regions of Tamil Nadu in the month of April.

·         Immediately after the partial relaxation of lockdown the month from May to July saw a slight increase in the employment provided pattern. The reason might be due to reverse migration from cities to villages made them to seek work under the employment guaranteed scheme.

·         In the month of August there was an overall dip in the employment provided pattern across all the districts in the northern region; the reason might be people engaging themselves in farm operations and as agricultural wage laborers as August was the start of new agricultural season.

·         In the month of September, there’s an increase in employment provided pattern; reason might be also agricultural sector was not able to provide work for the increased labour force due to reverse migration after nationwide lockdown. In predominant agricultural districts such as Tiruvannamalai, Villupuram, Thanjavur, Thiruvarur, Nagapattinam the reason might be, a possible drop in the overall agricultural labour generation activity or increased mechanization or shifting to less labour intensive cropping systems.

·         In the month of October, there’s a decrease in the employment provided pattern. The reason might be that a section of migrants has returned back to cities after the end of nationwide lockdown, and more employment opportunities in industrial sector because of the absence of migrant workers from UP, Bihar and other northern states.

*Data for this study comes from https://nrega.nic.in/